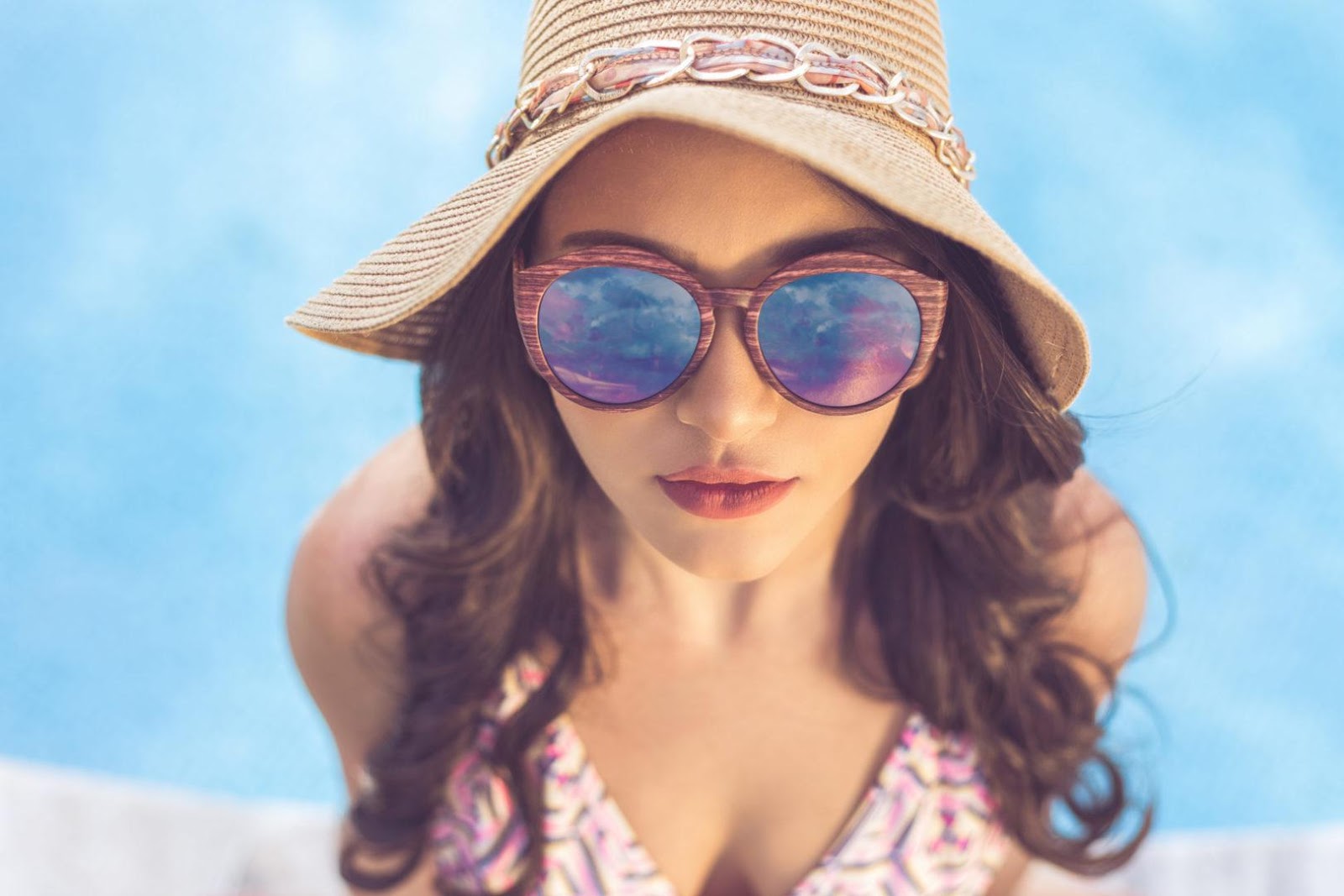 What is Vitamin D?

In recent years, Vitamin D has been a headline in medical news – too much, too little, who is at risk, what about supplements, and is there a link to cancer or heart disease?? As a result, the medical community has started to routinely test and now it has become abundantly clear that we have started to over-test for Vitamin D.

Vitamin D is an essential vitamin and helps to keep our bones and muscles strong and healthy. Of course there are some individuals in the population who are truly deficient, but the great majority of people get enough vitamin D through foods and sunshine. Food sources that are high in vitamin D include cod liver oil, salmon, and tuna as well as those fortified with vitamin D such as milk, cereal and orange juice. Limited sun exposure such as five to 30 minutes a few times a week also helps the body produce vitamin D. And, of course, there are multi-vitamins or supplements that can add additional vitamin D to the body.

Should we be performing screening on the general population?

In short, the answer is No.  As part of the Choosing Wisely® campaign, the American Society of Clinical Pathology (ASCP) contributed the following recommendation; “Don’t perform population based screening for 25-OH-Vitamin D deficiency.” Likewise, the U.S. Preventive Services Task Force (USPSTF) found the current medical evidence insufficient to recommend screening for vitamin D deficiency in the general population.

Does anyone need Vitamin D testing?

As stated above, there are individuals who are vitamin D deficient and testing for vitamin D is medically necessary. It is important that the same test is used each time if you need to track serial levels in order to be able to compare results.

You may want to consider vitamin D testing if your patient has:

For these individuals, serum 25-hydroxyvitamin D (25-OH vitamin D) is the correct test to use to assess vitamin D stores or diagnose vitamin D deficiency (or toxicity). 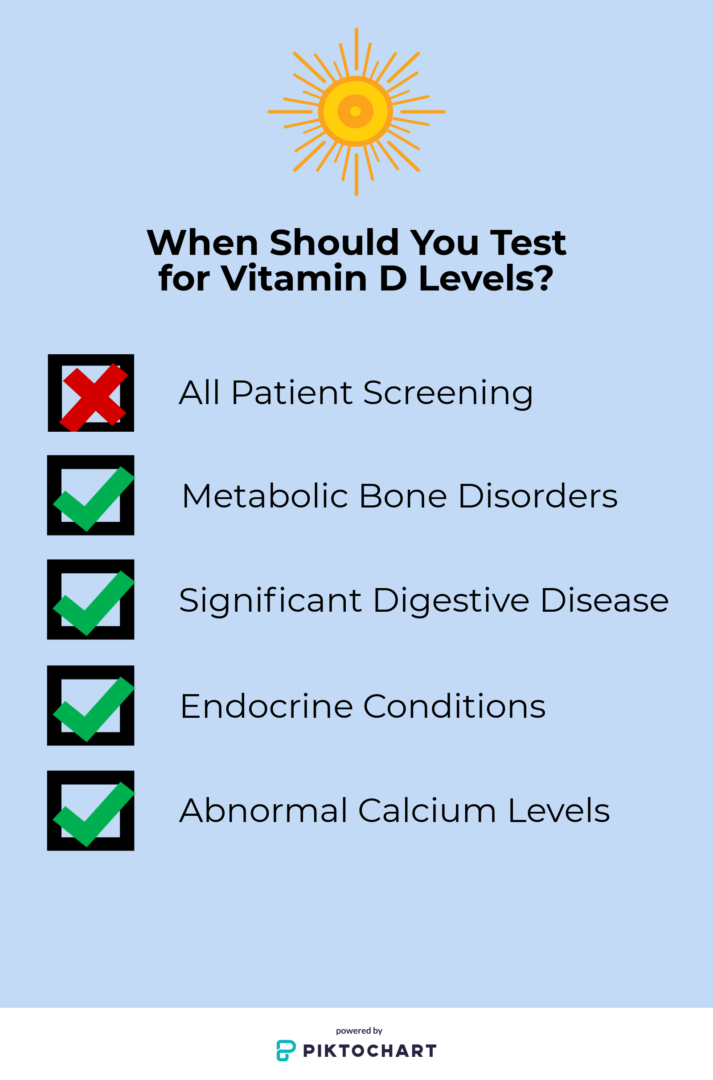 What about 1,25-dihydroxyvitamin D?

Another recommendation from the Endocrine Society regarding Vitamin D testing is “Don’t routinely measure 1,25-dihydroxyvitamin D unless the patient has hypercalcemia or decreased kidney function.”

There are so many choices in a laboratory directory that it is easy to get confused and check the wrong boxes. 1,25-dihyroxyvitamin D is regulated by parathyroid hormone levels and is not an accurate way to test for Vitamin D stores. Actually, this form of Vitamin D has very little relationship to stores of the vitamin and is actually increased in vitamin D deficiency. Therefore, using this test as a screening tool is incorrect and costly.

Will testing really hurt anything?

In general, there is overuse of the 25-OH vitamin D test and testing itself does not improve treatment. Again, few individual have significantly low levels and most individuals can make lifestyle changes to increase their levels without serial testing.

Extra tests may lead to excessive treatment and costs. A 25-OH vitamin D test may only cost a few dollars, but when thousands of these tests are ordered, the costs add up! For example, in 2011, Medicare spent $224 million on vitamin D tests for seniors and according to experts, many of these tests were unnecessary.

A group in Alberta Canada published a study in JAMA where health care providers had to provide an indication for vitamin D testing. The indications allowed included only: metabolic bone disease, abnormal blood calcium levels, malabsorption syndrome (e.g., celiac disease, small-intestinal surgery, and anticonvulsant agents), chronic renal disease, and liver disease. If a patient did not have one of these conditions, the testing was not allowed. During this time there was a 92% reduction in vitamin D tests ordered and a savings of $4 million USD.

Despite campaigns and recommendations, change in health care behavior can be difficult. With vitamin D remaining in the news, it is important to assess if an individual can make a few easy lifestyle changes to improve their vitamin D stores or is there a condition that warrants testing and treatment. 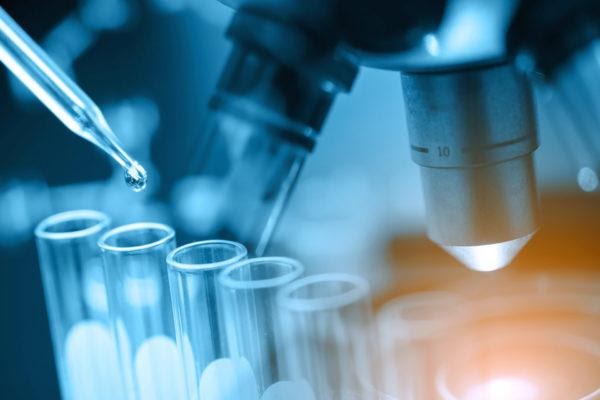